Hypothesis is web-based annotation software that can be used to annotate online texts.[1] The tool is generally available as an extension in Chrome or as a bookmarklet in Firefox. Additionally, Hypothesis has been integrated with Pressbooks. If you enable Hypothesis in your webbook, anyone can view public annotations of your book and readers with a Hypothesis account can add annotations without having to install a browser extension. Please note, if you use Hypothes.is on alternate web browsers, linked pdf files will appear with metadata. This is a problem with Hypothes.is, not Pressbooks.

Hypothesis provides some great examples of the educational use of Hypothesis on its website as well as the following guides:

Also take a look at the use of Hypothesis by Robin DeRosa’s students in The Open Education Anthology of Earlier American Literature. The annotations that you can see on this book are available to us because they have been made in the public Hypothesis layer; it is also possible to create a private group in Hypothesis if you or your students do not want their annotations to be public (see below).

Adding Hypothesis to Your Book

By default, Hypothesis will not appear on any pages of your book. 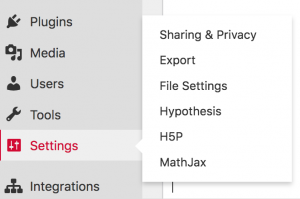 If you are an of the book, you can enable Hypothesis from the Settings section of your dashboard. On the Hypothesis Settings page, you can select how you would like Hypothesis to function in your book. You can specify the following:

Once you have configured Hypothesis for your book, save your changes.

Setting Up a Private Hypothesis Group

If you or your students do not want their annotations to be public, you can create private groups in Hypothesis that are only available to you and your students.

Even if you set up a private group to annotate your book, the public annotation layer will also be available, which allows your students to compare their internal conversations with broader discussions.

One of the five user roles available on any given book project; administrator is the role with the most available privileges for that project. Administrators can add, edit, and delete parts and chapters, they can add and delete users, and they can delete a book.